From the abstract:
A growing number of states are pursuing strategies to combat declining fuel tax revenue and fund road construction and maintenance, including the use of sales taxes, income taxes, and tolls; raising fuel tax rates; and adopting road mileage user fees. We use data from a nationally representative survey to compare public acceptability of a mileage user fee with each of these alternative revenue mechanisms. We find that support for the revenue options varies from 13.4 percent for income taxes to 33.8 percent for tolls, with higher gasoline tax rates, mileage user fees, and sales taxes in the middle. The evidence also points to stronger intensity of opposition than intensity of support across all alternatives. Finally, we find that, conditional on opposition to the mileage user fee, public acceptability is highest for tolls, followed by higher fuel taxes, sales taxes, and income taxes. Policy implications are discussed.

Provides quarterly estimates of state and local government tax revenue at a national level, as well as detailed tax revenue data for individual states. This report produces three tables: Tables 1 and 2 include income and sales data, and Table 3 provides tax collections by state. First quarter 2016 tax revenues for the four largest state and local government tax categories increased 3.1 percent to $317.0 billion, from $307.4 billion in the same quarter of 2015. 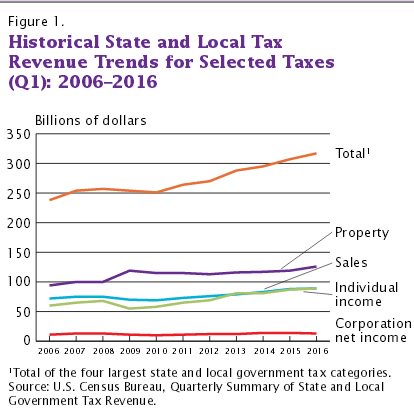 From the abstract:
Cities are once again on the rise and have become the site of major public debates, from income inequality and immigration policy to where and how Americans should live. While municipal leaders are often eager to fill the void in political leadership left by Congress and state elected officials, they are often hamstrung by state home rule laws, which define the powers states grant to municipalities. These laws limit, among other things, municipal taxing authority. Recently, local government scholars have wrestled with whether and how to grant municipalities more fiscal authority, but such scholarship has not provided a unified theory of municipal taxing authority.

From the abstract:
Over the last 20 years, states have adopted tax incentives focused on film production. Louisiana adopted the first state tax incentive program for film production in 1992, and by 2009 such tax incentive programs had expanded to 44 states plus the District of Columbia. The purpose of this paper is to identify the factors that explain the pattern of adoption of state film tax incentive programs. We develop a theoretical framework for analyzing states’ decision to adopt these programs that considers both internal characteristics and diffusion. We empirically investigate the timing of states’ adoption of film tax incentives using the Cox proportional hazards model with time-varying predictors. The estimates of many of the hazard ratios are consistent with our expectation, although several are statistically insignificant. As expected, the pattern of adoption across states supports the hypothesis that it is a “mimicking” phenomenon. However, we find that fiscal stress results in faster adoption of film tax credits, contrary to expectations, but consistent with the notion that states look at them as a “luxury.”

From the summary:
Our audit concerning the benefits and cost-effectiveness of state corporate income tax expenditures (tax expenditures) highlighted the following:
– Corporate taxes contributed $7.3 billion to the State’s General Fund in fiscal year 2012-13; however, forgone revenue from tax expenditures totaled more than $5 billion.
– Implementing oversight methods from other states could improve the effectiveness of the State’s current and future tax expenditures.
– Tax expenditure legislation does not consistently include policy goals, performance measures, and sunset provisions.
– The State does not conduct regular, comprehensive reviews of tax expenditures.
Our review of six of the largest tax expenditures revealed the following:
– Insufficient evidence and oversight of the research and development credit and the minimum franchise tax exemption make it unclear if they are fulfilling their purposes.
– The water’s edge election, the low-income housing credit, and the film and television credit appear to be achieving their respective purposes, but improvements would make them more effective.
– The Subchapter S corporation election appears to be achieving its purpose.
Related:
Fact Sheet
Recommendations

For as long as the Internal Revenue Code has existed, federal tax policy has exempted corporate entities organized and operated for charitable purposes, as long as they meet applicable federal requirements. The Code does not identify the promotion of health as an explicit charitable purpose, but since 1956 the IRS has recognized that hospitals can qualify as tax-exempt charities. The 1956 standards identified the provision of charity care as the sine qua non of tax-exempt status. But in 1969 the Nixon administration revised the standard, eliminating charity care as a basic requirement and substituting in its place a nebulous “community benefit” standard that gave hospitals broad latitude to define activities that would benefit their communities. These activities ranged from financial assistance to uninsured and underinsured patients to participation in government insurance programs, research, health professions education and training, and other “community health improvement” activities identified by a hospital. Legal services advocates for the poor unsuccessfully sought to halt this basic shift in federal policy; over many decades, the IRS offered no further elaboration on its revised standard and engaged in virtually zero enforcement activities. With some notable exceptions, state laws, which typically parallel federal tax law, remained unenforced.

From the abstract:
Despite mixed results, state government use of targeted economic development programs has escalated. This study evaluates the impact of motion picture incentive programs, an array of tax incentives employed by over 40 states to entice film and television productions out of California and New York, on labor and economic conditions from 1998 through 2013. Results suggest that sales and lodging tax waivers had no effect on any of four different economic indicators. Transferable tax credits had a small, sustained effect on motion picture employment levels but no effect on wages. Refundable tax credits had no employment effect and only a temporary wage effect. Neither credit affected gross state product or motion picture industry concentration. Incentive spending also had no influence. These findings demonstrate the heterogeneous impacts of different incentives offered under a single program and should inform future economic development policy design.

From the abstract:
This paper offers recommendations for how the design of labor income taxes should change during recessions, based on a simple model of a recessionary economy in which jobs are rationed and some employees value working more than others do. The paper draws two counter-intuitive conclusions for maximizing social welfare. First, subsidize non-employment. This draws marginal workers out of the labor force, creating “space” for those who really need jobs. Second, subsidize employers for hiring, not the employees themselves. The problem during recessions is having too few jobs; subsidizing employers creates more jobs, while subsidizing employees confers benefits on those who already won the job lottery. Tax policy in the recent recession has done a poor job of following these recommendations.

From the abstract:
The rhetoric of public purposes in charity law has created the mistaken impression that charity is public and fulfills public goals, when the reality is that charity is private and cannot be expected to solve the problems that governments can solve. The rhetoric arises from a combination of charity-law history and tax expenditure analysis. The reality follows the money and control of charitable organizations. On account of the mismatch of rhetoric and reality, the tax law of charity endorses an entitlement to pre-tax income and (ironically) creates a bias against taxation. This article reorients the project of defining public and private in the tax law by starting from a normative theory of government responsibility. It challenges the conventional economic justifications for the charitable deduction and exemption, arguing for a more philosophical approach that makes affirmative demands on government to distribute the returns to social cooperation. Under this approach, the appropriate role of private organizations is residual; they must achieve what governments cannot. The article concludes by arguing that current law’s tax benefits for charity are easily justified in this new understanding.

From the abstract:
Philadelphia has a complex and antiquated tax system that has long been criticized for driving employers and jobs away from Philadelphia by making it expensive to conduct business in the City. The centerpiece of the Philadelphia tax system is the Philadelphia wage tax, which raised more than $1.6 billion in 2014. That tax has been challenged as unconstitutional in light of the Supreme Court’s 2015 decision in Wynne v. Comptroller of Maryland, which struck down a structurally similar Maryland tax. This Essay explains the constitutional challenge to the City wage tax, argues that the tax is unconstitutional, describes steps the City could take to save that tax, and raises the question of whether Philadelphia should save or eliminate its wage tax.