From the abstract:
How noneconomic benefits claimed by labor unions relate to union interest is not well articulated. Based on Torres and Bergner’s (Journal of the American Academy of Psychiatry and the Law, 38, 195–204, 2010; Psychotherapy, 49, 492–501, 2012) analysis of severe public humiliation, in which status enhancement underlies recovery, we examined an augmented relationship between humiliation at work (the underside of dignity at work) and willingness to join a union. As hypothesized, nonunion employees who were less detached from work showed more willingness to join when presented with evidence that members of a union were satisfied with community aspects of membership related to status enhancement above and beyond their satisfaction with economic aspects. Implications for union interest research and applications are discussed.

Historically, public-sector unions have focused their attention almost entirely on negotiating for higher wages and better benefits. These days, though, many are showing up at the bargaining table to fight not just for themselves but also for the people they serve — like students, foster children and taxpayers. ….

Labor unions play a central role in the Democratic party coalition, providing candidates with voters, volunteers, and contributions, as well as lobbying policymakers. Has the sustained decline of organized labor hurt Democrats in elections and shifted public policy? We use the enactment of right-to-work laws—which weaken unions by removing agency shop protections — to estimate the effect of unions on politics from 1980 to 2016. Comparing counties on either side of a state and right-to-work border to causally identify the effects of the state laws, we find that right-to-work laws reduce Democratic Presidential vote shares by 3.5 percentage points. We find similar effects in US Senate, US House, and Gubernatorial races, as well as on state legislative control. Turnout is also 2 to 3 percentage points lower in right-to-work counties after those laws pass. We next explore the mechanisms behind these effects, finding that right-to-work laws dampen organized labor campaign contributions to Democrats and that potential Democratic voters are less likely to be contacted to vote in right-to-work states. The weakening of unions also has large downstream effects both on who runs for office and on state legislative policy. Fewer working class candidates serve in state legislatures and Congress, and state policy moves in a more conservative direction following the passage of right-to-work laws.

The GOP understands how important labor unions are to the Democratic Party. The Democratic Party, historically, has not. If you want a two-sentence explanation for why the Midwest is turning red (and thus, why Donald Trump is president), you could do worse than that.

With its financial contributions and grassroots organizing, the labor movement helped give Democrats full control of the federal government three times in the last four decades. And all three of those times — under Jimmy Carter, Bill Clinton, and Barack Obama — Democrats failed to pass labor law reforms that would to bolster the union cause. In hindsight, it’s clear that the Democratic Party didn’t merely betray organized labor with these failures, but also, itself…..

From the abstract:
Millions of workers in the United States experience volatile weekly working hours and nonstandard shift work, particularly following the Great Recession. These aspects of work schedules bring greater economic insecurity and work-life conflict, particularly for low-wage workers. In the absence of strong and widespread policies regulating work hours in the United States, labor unions may significantly limit varying hours and nonstandard shifts. However, any benefits of union membership could depend on local unionization rates, which vary widely between states. This paper analyzes the relationship between union membership and varying weekly work hours and nonstandard schedules among hourly workers using data from the 2004–2007 and 2008–2012 Surveys of Income and Program Participation. The results show that union members were significantly less likely to report varying numbers of hours from week to week, particularly in states with relatively high unionization rates. In contrast, union members were more likely to report nonstandard schedules. The earnings penalties for varying hours and nonstandard schedules are significantly weaker among union members than non-members. Altogether, the results demonstrate some of unions’ continued benefits for workers, and some of their limitations.

Last week, the Bureau of Labor Statistics released data on changes in union membership from 2016 to 2017. It was good news for workers, as the total number of union members grew by 262,000 in 2017. Three-fourths of these gains (198,000) were among workers aged 34 and under, who account for less than 40 percent of total employment…..

The Supreme Court long ago described the First Amendment’s protection against compelled speech as a “fixed star in our constitutional constellation.” This Term, the Court may decide whether it has steered too far from that shining precept in the area of public employee union dues (or agency fees) in Janus v. American Federation of State, County, and Municipal Employees, Council 31. Specifically, the Court will consider whether to overrule its 1977 decision in Abood v. Detroit Board of Education, in which the Court announced the basic test for determining the validity of “agency shop” arrangements between a union and a government employer. Agency shop arrangements (sometimes called “fair share” provisions) require employees to pay a fee to the union designated to represent their bargaining unit even if the employees are not members of that union. The Abood Court held that these arrangements do not violate the First Amendment insofar as the union uses the fees for “collective bargaining activities” and not “ideological activities unrelated to collective bargaining.” In its October 2015 Term, the full Court heard oral argument on whether to overrule Abood, but ultimately divided four-to-four on this question following the death of Justice Scalia. Now that Justice Gorsuch has joined the bench, it remains to be seen whether a majority of the Court will reaffirm Abood or chart a new course. Part I of this two-part Sidebar provides general background on Abood and the case law leading up to Janus. Part II then discusses the perspectives Justice Gorsuch may bring to Janus and the potential implications of the decision for public sector collective bargaining and compulsory fees more broadly.

As discussed in Part I of this two-part Sidebar, on March 29, 2016, an eight-member Supreme Court divided equally over whether to overrule its 1977 decision in Abood v. Detroit Board of Education and hold that public sector agency fees violate core First Amendment principles (the Court’s “fixed star”). Earlier this Term, the Court agreed to consider the question again in the case of Janus v. American Federation of State, County, and Municipal Employees, Council 31. Part II of this Sidebar begins with a brief summary of the parties’ arguments in Janus. It then highlights some key statements from the prior decisions of Justice Gorsuch, who is likely to be a critical voice in deciding whether to overturn Abood. The post concludes by exploring the potential implications of the Janus decision.

Unions had a pretty good year in 2017: they didn’t lose any ground.

According to the latest edition of the Bureau of Labor Statistics annual survey, released this morning, 10.7 percent of employed wage and salary workers were members of unions, unchanged from last year. There was a mild uptick in the share of private-sector workers represented by unions (aka union density), from 6.4 percent to 6.5 percent. Density was unchanged at 34.4 percent for public-sector workers — mildly surprising, given the war on labor being conducted by Republican governors and legislatures across the country…..

And, as the graph below shows, unions bring higher wages — especially for workers who are neither white nor male. 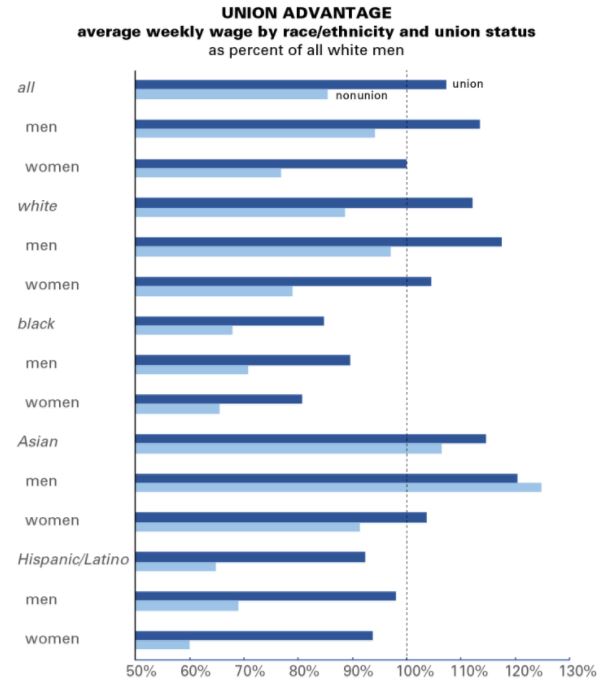 Unions also narrow gender gaps. Nonunion women of all races/ethnicities earn 82 percent as much as men; that rises to 88 percent for unionized women. Unions add 21 percent to the average weekly wage for men, and 30 percent for women. In other words, unions reduce inequality along all the familiar demographic axes — and make it harder to pit workers against each other…..

The union membership rate–the percent of wage and salary workers who were members of unions–was unchanged at 10.7 percent in 2017, the U.S. Bureau of Labor Statistics reported today. The number of wage and salary workers belonging to unions, at 14.8 million in 2017, edged up by 262,000 from 2016. In 1983, the first year for which comparable union data are available, the union membership rate was 20.1 percent and there were 17.7 million union workers. ….

At its best, the labor movement hasn’t just fought for better wages. It’s fought to bring democracy to workplaces marked by despotism.