These voter “turnout gaps” or voting inequalities are well-known among experts who study American democracy, but, in the following explainer, we argue that such voting inequality is underestimated in its social impact and in the larger policy debates about the direction of our country. More specifically, while it is obvious to many why the turnout gaps matter for democracy, it is less obvious why closing the turnout gaps and creating a more fully inclusive democracy matters for the policy decisions and social outcomes that should be the fruit of our democracy.

We aim to help clarify one important reason why this is so by examining how the turnout gaps reflect not only differences in power and privilege but also striking differences in policy views and ideology. At the core of this problem, we see that people in the under-voting groups tend to be more or substantially more in favor of progressive economic policies and government intervention in the economy compared to more affluent voters and particularly more affluent white voters. While money in politics is increasingly a focal point for explaining why the US policy landscape leans so heavily to the right compared to those of other wealthy democracies, the data we look at here suggest that our country’s cumulative voter turnout gaps—historic and contemporary—are also an important factor in the growing misalignment of public policy with the concerns and needs of working-class and low-income people, particularly in communities of color…..
Related:
If Anyone Ever Tells You Your Vote Doesn’t Matter, Show Them This
Source: Sean McElwee, Policy Mic, September 15, 2015
….. 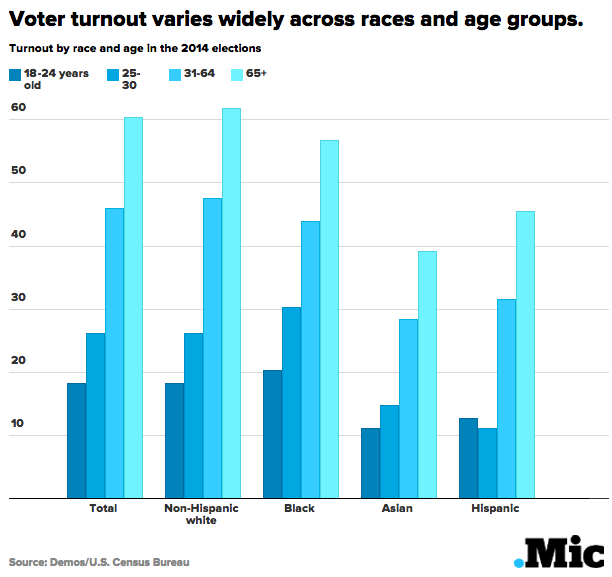