From the abstract:
In 2016, Social Security income from payroll contributions, tax revenues, and interest on reserves exceeded outgo by $35 billion, leaving a surplus. Reserves, now at $2.8 trillion, are projected to grow to $3.0 trillion by the end of 2021. If Congress takes no action before then, reserves would be drawn down to pay benefits. The Disability Insurance (DI) Trust Fund is projected to cover scheduled benefits until 2028, and the Old-Age and Survivors (OASI) Trust Fund until 2035. On a combined OASDI basis, Social Security is fully funded until 2034, but faces a projected shortfall thereafter. After the projected depletion of the combined OASDI trust funds, Social Security contributions and tax revenues would continue to be received and would cover about 77 percent of scheduled benefits (and administrative costs, which are less than 1 percent of outgo). The long-range actuarial shortfall over 75 years is projected to be 2.83 percent of taxable payroll – that is, 2.83 percent of all earnings that are subject to Social Security contributions. This projected long-term revenue shortfall increased from 2.66 percent of taxable payroll, which was reported in the 2016 Trustees Report. Timely revenue increases and/or benefit reductions could bring the program into long-term balance, preventing the projected shortfall.

Source: Office of Management and Budget, May 2017

President Trump’s new budget should lay to rest any belief that he’s looking out for the millions of people the economy has left behind.

The president’s proposal for next year’s federal spending calls for more than $1 trillion in cuts to social programs, including farm aid.

On Tuesday, President Trump released his 2018 budget proposal. It makes deep cuts across many anti-poverty programs, slashing food stamps by more than a quarter and children’s health insurance by 19 percent.

With an administration chock full of self-serving millionaires and billionaires, it comes as little surprise that President Donald Trump’s proposed budget would be an enormous windfall for the wealthiest Americans. But the degree to which it privileges the 1 percent at the expense of nearly everyone else—breaking Trump’s campaign promises to restore prosperity to everyday Americans—is staggering. Notably, by calling for cuts to Social Security, the budget violates one of Trump’s most significant promises.

Indeed, his proposed repeal of the estate tax alone—a tax that only affects the wealthiest 0.2 percent of estates—would cost the same as feeding more than 6 million seniors for a year through Meals on Wheels, a program facing deep cuts under the Trump budget.

The Trump administration unveiled a budget for 2018 on Tuesday that seeks to overhaul many of the country’s safety-net programs for low-income and struggling Americans. Though these cuts are popular among Republican lawmakers, they affect programs that are actually more commonly used in Republican-leaning states than in Democratic ones, and that in many cases benefit white voters without college degrees — a demographic group that strongly supported President Donald Trump in the 2016 election.
The programs experiencing the deepest cuts provide assistance for health care services to children, the poor and disabled, and that supplement food and housing for those with low incomes. Most of the programs were created decades ago by Democratic presidents.

The president’s full budget includes reductions in income-support programs that core Republican voters rely on—more so than other groups do.

From the abstract:
Our nation’s social insurance infrastructure forms the foundation of economic and health security for American workers and their families. Like all infrastructure, it must be periodically strengthened and modernized if it is to continue to meet the needs of a changing economy and society. This Report presents the new Administration and Congress with a range of evidence-based policy options, developed by the nation’s top social insurance experts, for doing so.

From the abstract:
The share of women working today is near an all-time high. While their earnings and projected retirement incomes have grown compared to previous generations of women, a significant gender gap still exists. At the same time, women continue to bear most of the responsibility of caregiving, and many have to juggle the demands of work and taking care of a child or adult loved one. To compound this struggle, more women are handling these duties on their own, as more are either never married or divorced. These challenges put a strain on women’s ability to work and earn a decent living, making it difficult to achieve economic security in old age.

Social Security has proven to be the most effective vehicle for the achievement of retirement security for most women. Enhancing Social Security benefits would be an effective strategy for improving women’s retirement security—especially for women 75 or older, who face a significantly greater risk of poverty than their male counterparts. Expanding benefits would require increasing system revenue beyond what is necessary to close the projected long-term shortfall. Provisions that increase benefits for low earners, caregivers, or older seniors, or modernize benefits for certain marital statuses such as the divorced and survivors, would address the challenges that women particularly face. But they would be available on a gender-neutral basis and would benefit other economically vulnerable groups, including people of color and people with disabilities.

From the summary:
Deciding when to take Social Security benefits is one of the most important financial decisions your parents will make. This infographic outlines thre things they should keep in mind to make smart claiming decisions. Depending on your parent’s financial situation, it may pay to wait, but definitely pays to talk.

The infographic is part of a toolkit of resources designed to educate workers approaching retirement, and their families and friends, about their options for taking Social Security benefits, and about why it can pay to wait. 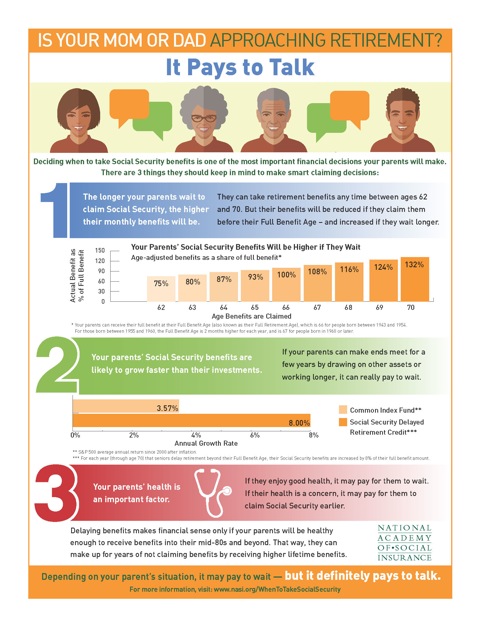 The full retirement age (FRA) is the age at which workers can claim full Social Security retired worker benefits. The size of the monthly benefits is affected by when the worker claims benefits. The worker’s age when claiming benefits is compared with the FRA, and adjustments are made depending on the number of months before or after the FRA the worker claims benefits. Adjustments for claiming before or after the FRA are intended to result in similar total lifetime benefits, regardless of when the worker claims benefits: retiring before the FRA results in a reduction in monthly benefits (to take into account the longer expected period of benefit receipt) and retiring after the FRA results in an increase in monthly benefits (to take into account the shorter expected period of benefit receipt. The FRA was 65 at the inception of Social Security, but has been gradually increased upwards, to 67 for those born in 1960 or later. Claiming benefits past age 70 does not increase the monthly benefits.

From the summary:
GAO’s review of nine surveys and academic studies, and interviews with retirement experts, suggest that many individuals do not fully understand key details of Social Security rules that can potentially affect their retirement benefits. For example, while some people understand that delaying claiming leads to higher monthly benefits, many are unclear about the actual amount that benefits increase with claiming age. The studies and surveys also found widespread misunderstanding about whether spousal benefits are available, how monthly benefits are determined, and how the retirement earnings test works. Understanding these rules and other information, such as life expectancy and longevity risk, could be central to people making well-informed decisions about when to claim benefits. By having this understanding of retirement benefits, people would also be in a better position to balance other factors that influence when they should claim benefits, including financial need, poor health, and psychological factors.

The Social Security Administration (SSA) makes comprehensive information on key rules and other considerations related to claiming retirement benefits available through its publications, website, personalized benefits statements, and online calculators. However, GAO observed 30 in-person claims at SSA field offices and found that claimants were not consistently provided key information that people may need to make well-informed decisions. For example, in 8 of 26 claims interviews in which the claimant could have received higher monthly benefits by waiting until a later age, the claims specialist did not discuss the advantages and disadvantages of delaying claiming. Further, only 7 of the 18 claimants for whom the retirement earnings test could potentially apply were given complete information about how the test worked. SSA’s Program Operations Manual System (POMS) states that claims specialists should explain the advantages and disadvantages of filing an application so that the individual can make an informed filing decision. The problems we observed during the claims interviews occurred in part because the questions included in the claims process did not specifically cover some key information.
Online applicants have more access to key information on the screen or through tabs and pop-up boxes as they complete an application. However, similar to in-person interviews, the online application process does not inform claimants that benefits are based on the highest 35 years of earnings or that life expectancy is an important consideration in deciding when to claim.

Users can download the PowerPoint presentation and sort the slides in a different order or pick and choose a subset to use. The presentation includes talking points that go with each slide. To view the talking points, simply go to View > Notes Page. The sources for the factual material are listed on each slide.

The PDF versions include both the slides and the notes pages that go with them on the same page.