By request, here is an update on an earlier post through the December employment report.

NOTE: Several readers have asked if I could add a lag to these graphs (obviously a new President has zero impact on employment for the month they are elected). But that would open a debate on the proper length of the lag, so I’ll just stick to the beginning of each term. 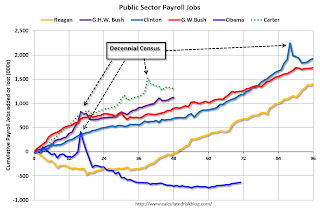